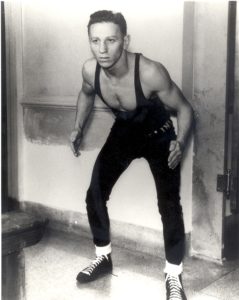 His collegiate wrestling was at the University of Illinois where he became a two time Big 10 Place winner and one time champion, which culminated in winning the NCAA Divisions Championship in 1938.

When he won the National Championship, it marked the first time that brothers has accomplished this feat. His brother Joe had done this in 1929 and 1930.

Along with Hek Kenney, he aided in demonstration of wrestling at over 50 high schools throughout Illinois, teaching wrestling principles and rules. As an official he worked numerous dual meets in the area and at the University. He officiated in 5 State Championships. With Hek Kenney he also officiated at the Canadian National Championships.