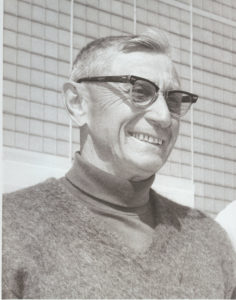 Dr. Hill founded the Illinois State University’s Wrestling Team and coached that team for 30 years. During this span of time, his teams had a 138-76-6 record in dual meets, with Conference Championships in 6 of those seasons. Conference was not organized until after World War II.

Dr. Hill was a graduate of Illinois State University. He began teaching at ISU the same year of graduation. At various times he helped in almost every athletic area. He started the Tennis program there as he did wrestling, winning 12 Conference Team Titles. He also organized and began of the ISU Cheerleader School, a school that still attracts numerous people to the campus and he was the director of campus recreation. All of these activities were being done by Dr. Hill while maintaining excellence in the wrestling programs. He had a number of place winners in the NAIA, notably Wally Hess who won the 177 lb. title.

He is a member of Illinois State University Hall of Fame.

Some of the other wrestlers that are in the teaching coaching field are: