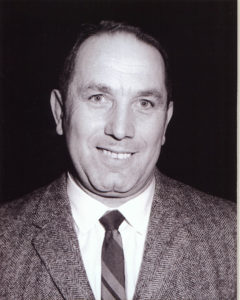 Mr. Wilkenson originated from Bloomington and Elkhart, Indiana where he wrestled in the State championships meets. He entered Indiana University where he became a Big 10 Champion. After graduation he stayed at Indiana to become a graduate assistant.

Jim came to Southern Illinois University in 1949 where he began to develop their wrestling program. In 1951 he left to become the Head Wrestling Coach at Oregon State University, but returned to Southern in 1952 because of the weather effects on him. He continued coaching at Southern until 1968 when he retired from coaching Wrestling, but remained on staff as an instructor, a position he still retains.

During his tenure at Southern, his teams won the NIAC championships a number of times and also won the Wheaton College Tournament a number of times. When the NAIA Nationals began in 1958 Southern entered this Division where the team placed 2nd in 1959 and 2nd in 1960. In this Division Jim had 12 place winners in 3 years, 6 of whom were Champions. During this time you could belong to both the NAIA and the NCAA Southern dropped from the NAIA in 1961 to remain with the NCAA. In 1963 the NCAA divided into Class I and Class II Southern elected to enter Division II and remained there in 1963 and 1964.In those two years in Division II, Jim produced a 2nd place team and a third place team. His wrestlers placed 9 times, of this 6 were champions. In Division I, his teams placed 6th and 4th. He had 7 place winners of which two were Champions. Some of his most notable wrestlers during this time would be: Larry Kristoff; Terry Finn; Ken Houston and Don Millard.

Overall his teams were in the top 20 for 10 years in Division I.

Dr. Wilkenson was the NCAA Division Coach the Year in 1964.

He was President of the NCAA Coaches Association, Division I in 1968.

He has been a member of the NCAA for 33 years and the IWCOA since its beginning.