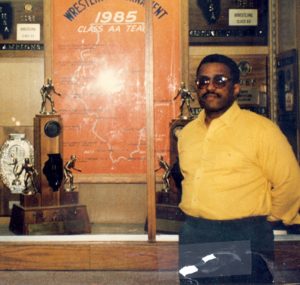 Mac began his Wrestling Career at Chicago Dunbar High School, where he was a State Qualifier. His Collegiate Career was at North Central College where he was a CCIW Conference Champion and a two time placer in the Wheaton College Invitational. He was also Captain of his team in both his Junior and Senior Years.

His Coaching began at Joliet Central High School and is still going. His first year at Joliet Central was as the Head Sophomore Coach, but in his 2nd year , 1967, he took over as the Varsity Coach, a position he has held now for 24 years.

His dual meet record is now 377-60-12. He has won their Conference 3 times for which he was name Coach of the Year; he has won 5 regionals and 2 sectionals. His teams down state have been in the top 5 three times and the top 10 9 times, while the tournament was scored individually. He has had 59 Qualifiers, 24 place winners of which 8 were Champions.

His other coaching duties have been vast: Assistant Football for 17 years, head football for 4 years, head track, head badminton and assistant in softball. He now does commentary for the local tv station at the football games.

He is now and has been for some years the Dean of Students at Joliet Central High School.