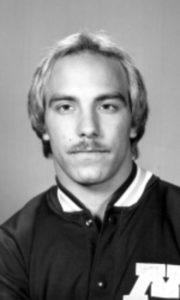 Ed began his long career at Fenton High School for Hall of Famer Steve Weiss. While at Fenton he qualified for the State Championships 4 times. He won Two State Titles and Placed 5th. His total wins for 4 years stands at 172. As a senior he won the US Junior National Free Style Championship.

His Collegiate Days were at Minnesota University where he placed 3 times in the Big 10, Winning Two Titles and being Named Outstanding as a senior. He also placed third in the NCAA Division I Tournament. During his stay at Minnesota and shortly after, he placed 4 times in the Midlands, winning it once; He won the UN-Omaha Open; and placed 6th in the World Espoirs in Free Style.

His post Collegiate Wrestling has found him involved in numerous events:

* He has placed 4 times in the John DuPont Open which is the USA Open; in Free Style

* He has placed 6 times in the US Sunkist International Open, Winning it once

* He placed 6th in the AAU Greco Roman

* He Placed 2nd in the Cerra Pelada Tournament in Cuba

* He Was The Champion of the Czechoslavakian Grand Prix

* He Placed 2nd in the Polish Grand Prix

* He Placed 3rd Two times in the Olympic Festival

* He Was a World Team Trials Runner-up

He has been an Assistant at North Dakota State; Minnesota University; and Northwestern University. He is presently a member of the Fox Catcher Wrestling Organization, out of Pennsylvania where he still Coaches and Competes.