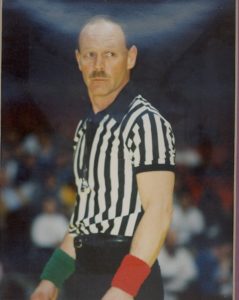 Ed Luety did his high school wrestling at East Leyden High School for Hall of Fame coach Chuck Farina. He was a state qualifier in 1964 at 103 pounds. Ed wrestled for one year at Wayne State University, but a knee injury ended his wrestling career and he returned home to enter into business.

At the urging of Jack Leese, he began officiating in 1969. Since that time, he has officiated eighteen individual state finals and ten dual meet state finals. He is the only official to be named as Official of the Year four times, 1983, 1984, 1986, and 1992. He also was selected to receive the National Federation of State High School Associations Officials Award in 1992.

In 1989 Ed was named the IWCOA Man of the Year and was inducted into the IWCOA Hall of Fame in 1991. He served as the Grand Marshal at the I.HS.A. Individual State Tournament in 1998.

Ed served on the I.H.S.A. Wrestling Advisory Board from 1992-95, becoming the first non-educator in the 48 year history of the I.H.S.A. to serve in that capacity. He also served on the IWCOA Executive Board for eight years, as official’s representative and fundraising chairman. He also is a member of the IWCOA Hall of Fame Selection Committee.

Since his retirement from officiating in 2001, Ed has worked as an assistant coach at Notre Dame High School in Niles.