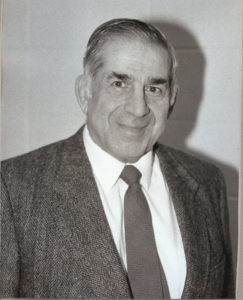 He began his coaching in Kansas, moving to Illinois in 1951. He started Coaching at Blue Island, Illinois, moved to Oak Lawn and finally to Evanston where he has been the past 15 years. His career record as a coach is 302 wins, 71 losses and 6 ties. 250 of these wins have been in Illinois. During his coaching tenure in Illinois, Elias has won 3 Southwest Conference championships;10 District Championships; 4 Sectional Championships, finished 4th and 2nd in the State Championships and has been in the top 10 numerous times. He has produced 31 state place winners of which 8 were State Champions. Some of his outstanding wrestlers were: Terry Finn, NCAA Champion, College Division and University Division for Southern Illinois; Ken Houston, Small College Champion and twice 3rd in the University Division.

Elias is well known in AAU circles, having been the National Chairman for the Junior Olympic Wrestling program and is presently on the Olympic Wrestling Committee. He is one of the originators of the present day Mayor Daley Club, although in its infancy was called the Illinois wrestling Club. He has taken boys to numerous AAU and Olympic functions to participate. Elias has done much of the officiating at these various functions. In recent years as wrestling has grown, Elias has taken teams to New York, California and has now established an exchange dual meet relationship with Pennsylvania.