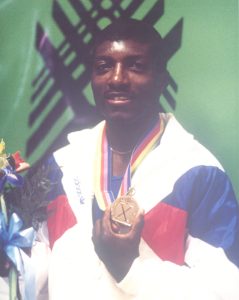 Eric Wrestled at Chicago Dunbar High School. After Graduation he immediately entered the United States Marine Corp. He has recently retired from the Marines 9 however it was during his service that he became involved in International Wrestling both in Greco-Roma n and in Free Style. He has Won or Placed in Numerous International and National Tournaments as follows : YMCA, both Free Style and Greco Roman; AAU; Concord; Sports Festival; Hall of Fame Classic; Olympic Festival, US Military; US Open; World Cup; Pan American.

in Greco Roman; won the USA World Cup Trials; Won the USA Open in FS; won the AAU GR Twice; he was 3rd in the World Cup at Oak Lawn; DNP in World Cup in France ; 3rd at Byelorussian; 3rd at Petrov, Bulgaria; 3rd in Pan American Games.

Over his career, Eric has won or placed in over 60 Tournaments at the National or International Level.

He volunteers at Lane Tech and most recently was on the Cadet and Junior National reams as a Coach. He is the head coach of the Chicago crusaders wrestling club out of Wright Junior college.

He was the Military Athlete of the Year in 1986

He attended the Northern Community College.