Fred Kroner covered the IHSA wrestling state tournament for 40 consecutive years, a streak that ended in 2016 after he retired as sports editor of the Champaign-Urbana News-Gazette.

He first covered the event while working for the Champaign-Urbana Morning Courier in the 1970s and later for three years with the Bloomington Daily Pantagraph.

During his final 35 years as a full-time sportswriter, all at The News-Gazette, Kroner also coordinated and compiled a weekly Wrestling Honor Roll for the various high schools in his circulation area. Unlike counterparts who based their honor rolls on a wrestler’s winning percentage, Kroner used the actual results from competition to determine Honor Roll points.

For example, if a wrestler won twice by pin and once by major decision and then lost twice by regular decision, the person’s Honor Roll point total would be 10 points (6 plus 6 plus 4 minus 3 minus 3). Each wrestler was always listed by weight class and he had separate listings for the different small-school or large-school classifications based on enrollments.

Kroner was selected four times as the Newsman of the Year by the Illinois Wrestling Coaches and Officials Association: 1984, 1988, 2000 and 2009. He was the first person in the state to earn that recognition four times.

He was also a regular attendee of the dual-meet state series, covering the event at every location but one where it has been held: the UI Assembly Hall, Mahomet-Seymour High School, Redbird Arena in Normal, Huff Gym in

Champaign, East Peoria, Rock Island, Naperville North, Moline, DeKalb and Bloomington at the U.S. Cellular Coliseum. The only site he missed after the inception of the dual-meet series in 1984 was the one year it was held at East Peoria (1998).

Kroner didn’t just pick up his newspaper coverage when the postseason began. He was on site for an assortment of regular-season tournaments, including ones at Argenta-Oreana, LeRoy, Mahomet-Seymour, Tolono Unity and Urbana as well as numerous conference tournaments. He always reserved time in his schedule to cover regionals and sectionals.

He covered the sport wherever it might be, too, which included at a mall in the mid-1980s when Urbana and Centennial held an annual dual at that unique location in an effort to create interest in the sport.

When the individual state tournament started each year at the University of Illinois Assembly Hall, Kroner highlighted not only athletes from his coverage area, but also marquee individuals from throughout the state. With the help of Rob Sherrill (Illinois Best Weekly), who provided an advance copy of his individual state rankings,

Kroner made certain The News-Gazette always published a list of the top-ranked wrestler in every weight class.

Since retiring from The News-Gazette, Kroner has continued writing part-time – and still enjoys reporting on wrestling – for the online Mahomet Daily and the online St. Joseph Daily.

Kroner was born and raised in Mahomet and has lived in his hometown since 1981. He and his wife Emily have four combined children and seven combined grandchildren. 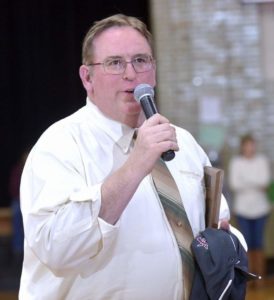