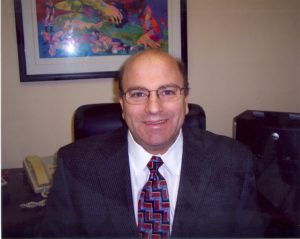 Fred Arkin began his wrestling career at Oak Park & River Forest High School in 1972 and was honored as Team Captain and All-Conference his senior year in 1974. He continued wrestling in college at Washington University in St. Louis where he was a three year letterman, team captain and a NCAA Division III national qualifier in 1975 at 167lbs.

After college, Fred returned to the Oak Park area and helped organize the Oak Park Junior Wrestling Club, which became the Warhawks and is now the Little Huskies. Fred was associated with the Huskies/Warhawks until 1988. In 1988 Fred moved to Hoffman Estates and founded the Junior Cougar Wrestling Club at Conant High School.

Under Fred’s leadership, the both Oak Park Youth program and the Junior Cougars contributed to their respective high school programs’ development and success. In 1988 Oak Park & River Forest High School, full of Fred’s former charges placed 2nd in the IHSA AA Dual Meet Tournament. Then in 1996 & 2000 his Junior Cougars filled the Hoffman Estates (Conant) line-ups when they placed second in the IHSA AA Dual Meet Tournaments.

As an IKWF Coach, Fred had 191 state qualifiers, 49-place winners and 15-champions. His teams also placed 3rd, 4th & 5th in the individual and 3rd & 5th in the dual team IKWF state tournaments. Beyond coaching Fred contributed to the IKWF as an administrator, serving as an Alternate Sectional Director, Finance Committee Chairman and the Tournament Director for the Elite Division of the Kids Open.

Fred was very active in the Illinois Wrestling Federation. He coached and was an official in Freestyle and Greco Roman programs from 1988 to 2000. He participated in almost all state, regional and national events. As a USAW category M-1 Official, Fred worked The Cadet, Junior and University National Tournaments. Fred was also a member of USA Wrestling’s National Coaches pool and led teams on Tour du Mondes to New Zealand and Italy/Sardinia.

Fred provided well needed organization and administrative skills to the IWF as the National Training Camp Director, Junior Director and served as the State Chairman of the IWF from 1993-1997.

Under his leadership, the Illinois Wrestling Federation (IWF) successfully hosted over 400 wrestlers from 42 countries at the 1994 Cadet World Championships in New Lenox. Fred contributed with other IWF junior leaders in founding and developing the program that has evolved into USA Wrestling’s Junior National Dual Meet Championships. Also during Fred’s term as State Chairman the IWF founded the Frosh/Soph State Tournament Series that continues today.

Fred’s work with USA Wrestling brought him to the 1995 World Championships and 1996 Olympic Games as a staff member in the Wrestling Venue.