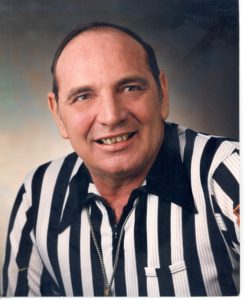 Gary is a graduate of Annawon High School, which did not have Wrestling. His Collegiate days were spent at Parsons College in Iowa where he played football.

He began his Officiating Career in 1965, a career that ended in 1992 a total of 27 years. During this time he officiated 21 Regionals; 16 Sectionals and worked the State Finals 7 times with the Whistle. He has also served as a Bench official at the State Meet.

During his time at Rock Falls, he co-sponsored Rules Clinics for coaches and officials. He constantly pushed for uniformity in officials in the Northwest part of Illinois and helped to bring many young officials into Wrestling with his guidance. He was named a Friend of Wrestling by the Illinois Wrestling Coaches and Officials Association in 1990. He was named the Official of the Year by the National Federation for Illinois in 1991-1992.