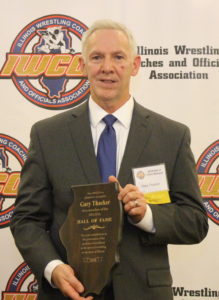 Gary Thacker was born in Streator and raised in Pontiac, Gary has lived his entire life in the state of Illinois.

While at Pontiac High School, he participated in football, wrestling, and track and field. Gary was a four-year starter in wrestling for Coach Carl Stebbins. In this program, he was able to succeed in becoming a conference and regional champion and an IHSA state qualifier. He would also finish fourth in the State Greco Meet.

The next phase of Gary’s life would see him move to Vandalia High School and then on to Belvidere High School and eventually to Belvidere North High School. During his many years at these schools, Gary taught Physical Education and Health and he would coach wrestling, football, and tennis, before retiring from teaching in 2012. In total, he spent 29 years coaching wrestling, 23 of which he served as head coach. His teams earned 247 dual meet wins, 5 conference championships and he produced 39 state qualifiers. Of these 39 qualifiers, 12 placed, 6 became finalists and 4 became IHSA State Champions.

Later in his career, Gary was successful in establishing the wrestling program at the newly opened Belvidere North High School. There he served as head coach for 5 years and then, following his retirement, as assistant coach for one year. In addition to his high school experience, Gary also coached with Team Illinois and at the Prairie State Games. For four years, he served on the IWCOA Executive Board where he served a term as IWCOA President.

Gary has been married to his wife, Heidi, a microbiologist at OSF St. Anthony Medical Center, for 40 years. They are the parents of two daughters Kelsey and Kendall. Kelsey, a graduate of Indiana University, is currently a

Programme Lead/Equine Specialist at the non-profit, Strength and Learning through Horses, which serves vulnerable or disadvantaged individuals. She lives with her husband Nick in the United Kingdom. Their second daughter Kendall graduated from the University of Georgia and is now teaching at Cambridge Friends School in Massachusetts. She and her husband Jason live in Cambridge.