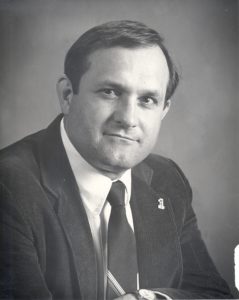 George was a wrestler at West Leyden High School and coached by Hall of Famer Marty Schwartz. His collegiate days were spent at Coe College in Iowa, where he placed 4th in the NCAA Division Two Championships. He was Coe College First National Wrestling Place winner.

George has been host to a number of IWCOA tournaments, IWF tournaments and more recently the Prairie State Qualifying Tournaments.

George is a product of West Leyden High School, where he wrestled for Hall of Famer coach Marty Schwartz. His collegiate career was spent at Coe College. He became Coe’s first All-American wrestler after his fourth place finish in the Division II Nationals at 167 lb. in 1965. During his tenure at Coe, George won one conference title and finished second twice.

In 1967, George started his teaching and coaching career in Bettendorf, Iowa under National Hall of Fame member Franc Freeman. After assisting Freeman for two years, he assumed the position of Head Coach at Rochelle High School. George stayed at Rochelle for three years, producing three state qualifiers and two place winners. In 1972, he relocated to West Aurora high School and, although he retired from the teaching ranks in 2001, he continues to this day as the school’s Head Coach. During his head coaching career, George’s teams have won over 400 dual meets, one conference title, and three IHSA Regional Championships. His squads have produced 45 State Qualifiers, with 19 place winners. He has coached five State Champions. Prior to the advent of the Dual Meet State Tournament format, George’s teams had placed in the top ten twice.

George has hosted numerous Illinois Wrestling Federation tournaments at West Aurora high School. He served as the original State Wrestling Chairman for the Prairie State Games. After having been in the position for five years, he assumed the role of assistant Team Leader for the IWF Illinois Junior National Team. The following year, and for the next four years, George served as the Team Leader for Illinois. He and his wife, Renee, have worked every Midland Tournaments since 1974. George has been the Bench Coordinator for the last 15 years. In addition, in 2001 he served as head Bench Official for the Big Ten Tournament.

On April 4, 2004 the National Wrestling Hall of Fame and Museum honored George Dyche for Lifetime Achievement to Wrestling.