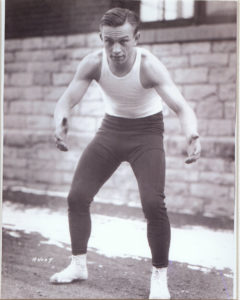 George began his wrestling career at the University of Illinois. Harvard High School did not have wrestling at this time. George wrestled for Paul Prehn in 1926 and 1927 and then for Hall of Famer Hek Kenney in 1928 and 1929. He was Fourth in the Big 10 at 135 in 1927. In 1928 was an Olympic Year and many wrestlers opted out of the National Tournament which was being conducted for the First time, for the Olympic Trials. George won the Chicago Regionals, but was injured in the process and could not continue. His injury was to the silver medalist at the 1925 Olympics. In 1929 found George in better straights as he Won the Big Ten Championship at 135 and then captured the 135 pound National title, pinning the Oklahoma State man in the semis and beating West Virginia in the finals.

Upon graduation George went back to the Harvard area, where he began teaching in the Orangeville and Capron High Schools and then on to become the Vocational Agriculture and Biology teacher at Harvard High school, where he stayed for 23 years, retiring to farming in the area and then on to Florida where he now resides. Although there was not any wrestling in the area, George did teach wrestling to many of the interested boys in the area.