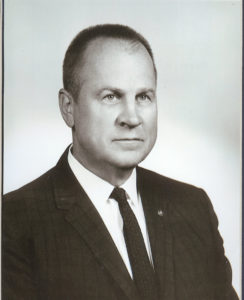 Originally from Wheaton Community High School and Wheaton College, his coaching has spanned 41 years, 29 of those years at Wheaton College where he was Varsity Wrestling Coach all of those years, plus having Football, Baseball and Tennis assignments. These years were in the era before the Nationals became a Class system. Wheaton College had many Big 10 schools consistently on their schedule. His teams during this time Won 184 and lost 76. Although the

Wheaton College Tournament was started before George came on the scene (this tournament is the 3rd oldest in the Midwest), he kept the Tournament alive and made it prosper even more. His teams were consistent high place winners and often won it. One stretch, his teams won this title 4 times in a row (1946-1950). George has had numerous National Place winners, including one Champion, Tom Jarmar present coach at Taylor University. Some of his protégés that are involved in coaching are: Pete Willson, a 4 times Wheaton College Champion and present coach at Wheaton College, himself a Wheaton College Hall of Famer; Jim Gustafson of Messiah College; Dennis Hastert of Yorkville and John Fuller of Wheaton Central. George served in many capacities as a promoter of Wrestling in the Collegiate Circle which included a term of duty as a member of the National Rules Committee.