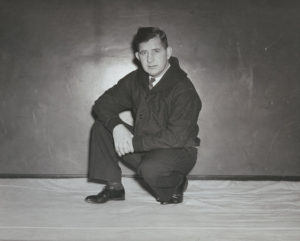 Assistant Coach at the University of Illinois for 14 years. Varsity Coach at Illinois for 6 years. During his Varsity Coaching days, Illinois won 26, 10st 14 and tied 2. They won 2 Big 10 titles and once were runner-ups. They placed 5th, 3rd, and 3rd in the nationals. He had 14 national place-winners, plus a number of Big 10 place winners.

Co-sponsor with Hek Kenney of the Illinois State Championship Finals. He was a well-known official. He conducted the first wrestling clinic in the State of Illinois. He co-authored two wrestling books.

At the time of his death in 1950, he was the Secretary Treasurer of the NCAA coaches association and was serving on that Organizations Rules Committee.

The program at Lehigh in 1951 was dedicated to him.