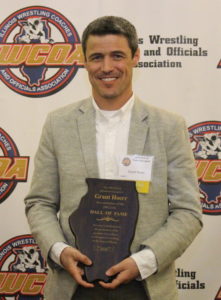 Originally from Morton, Illinois, Grant Hoerr attended Morton High School from 1993-1997 where he compiled a career record of 153-7. Grant was a four-time state qualifier finishing 3rd as a sophomore and he went undefeated his final two regular seasons to win back to back IHSA state titles under the guidance of IWCOA Hall of Fame coach Greg Prichard. Guided by the takedown philosophy and techniques of Coach Prichard, Grant was able to compile 803 takedowns over his high school career. In his senior campaign he accumulated 308 takedowns.

On a national high school level Grant was able to represent Team Illinois as a 3x Junior Freestyle National Qualifier and following his senior season he was able to compete out in Pittsburgh, PA at Senior Nationals where he earned All-American honors placing 7th.

Following his high school career, he attended the University of Wisconsin-Madison where he graduated with a BS in Agricultural Business Management in 2002. While attending Madison he competed for Iowa Hawkeye legend and Olympic Silver Medalist Barry Davis and national champions Terry and Troy Steiner. During his tenure at Wisconsin, he went on to become a, 4-year varsity award winner, 3x national qualifier, captain, and two- time recipient of the Most Improved Wrestler for the badgers. Additionally, in Grant’s 2001 campaign with the badgers he broke through to All-American honors on the back of a Cinderella run through the tournament. Hoerr was a No. 11 seed at the NCAA championships, but behind a string of upsets of some of the nation’s top-ranked wrestlers, found his way to the podium and a fourth-place finish.

Grant has remained involved in the sport of wrestling as head coach of Gordon Tech High School from 2006- 2012 winning a Team Regional title in 2011. Since 2013 he has been an assistant wrestling coach of the Maine South Hawks under Head Coach Kevin Hansen where they have won two conference titles and a 2018 Team Regional title.

Grant and wife Kari have settled in Park Ridge, Illinois where they have 3 amazing children (Gavin 9, Grady 6, and Raegan 1). He received his Master’s degree in Teaching from National Louis University and currently teaches 3rd grade in Glenview, IL. His hobbies include watching Packers football and simply spending time with his family.

Grant would like to give a special thanks to his parents for all the time they sacrificed sitting in the gyms all those years and for always expecting the best. He feels very blessed to have been fortunate to meet and be helped by so many amazing people in his life. From an incredibly supportive family to great coaches and friends, he has continuously been surrounded by nothing but the best people and is thankful for all their love and support.