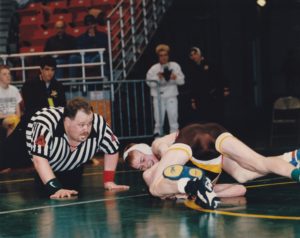 Greg Anderson was born in Pittsburg, PA. He attended United Township High School in East Moline, IL. He wrestled for IWCOA Hall of Fame coach Bert Hanlin. He competed for four years and had a varsity record of 26-8. He finished second in the district and was named Most Improved his senior year. He also played football and golfed and was selected as a honorable mention selection in the Western Big Six Conference.

He attended Black Hawk College and wrestled for Tony Boyd. He compiled a record of 66-44 and was named Academic All-American in both 1980 and 1981. He also competed in track for one year.

After college Greg moved on to officiating for the IHSA. He has put together a stellar career as an official earning the respect of fans, fellow officials and coaches.

Greg is engaged to Diane and will be married in September.