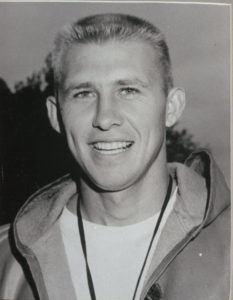 His High School Days were spent at Suwanee Military Academy in Tennessee and his Collegiate Days at Stevens Point in Wisconsin where he was a boxer.

He came to Eastern Illinois in 1954 primarily as the Assistant Football coach and without any knowledge of the sport, started the Wrestling Program.

Although it took a few years to catch on, Hop did this willingly and with a lot of effort began to show some success. His teams won the IIAC Champions Twice; He developed 9 place winners and two Champions in the NAIA. Hop was instrumental in changing the University over to the NCAA Division II category where he developed another 10 place winners. At one time Hop could boast that 25 of his wrestlers were actively coaching in Illinois. For his efforts he was named NATA District Coach of the Year in 1961. Eastern Illinois University inducted him into their Hall of Fame In 1986.