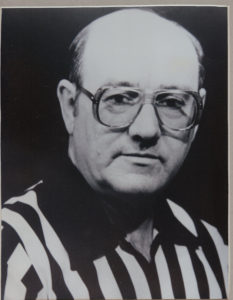 Mr. Harold “Sam” Samorian has been an Official in the State of Illinois for 31 years. During that time he has officiated 28 Regionals, 26 Sectionals and 16 State Final Championships. He has been the Head Floor Official at the State Finals. His other officiating experiences have been The First 10 Midland; Division III Nationals; State Junior College Tournament; Numerous College meets and tournaments. He has been an Interpreter for the State concerning rules for 22 years. He was one of the first 10 certified IHSA Officials. He has also participated in a number of IWCOA Clinics for Officials and Coaches as a clinician.

Sam was instrumental in getting the wrestling program started at Sycamore High School when he began the Intramural program, although he was not the Head Coach, he did help in the program. Sam has been a Charter and Lifetime member of the IWCOA; He was the Secretary of the MidStates Wrestling Officials Association which was a forerunner to the present IWCOA. For his efforts in Officiating Sam was named Official of the Year in 1980. Sam has been in the IHSA Championships in 4 sports:

Basketball as a player for Rockford, East in 1948

Football as the Head coach for Glenbrook North in 1974 – The year they were Champions.

Baseball as the Assistant Varsity Coach for Glenbrook North in 1966

Wrestling as an Official 16 different years

Football Coach of the year 1975

National Federation Official of the Year for Illinois in 1989

Harold “Sam” Samorian attended Rockford East High School. While in high school he participated in football, basketball, and baseball. Rockford East was Runner-up during his senior year in 1948. Sam went on to Illinois State University in Normal, IL and competed in football, basketball and baseball. He earned his B.S. from I.S.U. in 1955 and his M.S. from Northern Illinois University in DeKalb in 1959. Sam completed Doctoral work from Florida State University from 1966 to 1969.

Sam began teaching in 1955 at Sparland High School in Sparland. He taught history, biology, health, P.E. as well as serving as senior class sponsor, Athletic Director, Head Baseball, Basketball, and Track Coach. In 1957 he moved to Sycamore to teach and coach football and basketball. He took the position of Head Football Coach in 1958 at Glenbrook North High School. He was also assistant baseball coach and taught biology, health, P.E., and drivers education. Sam was an assistant baseball coach for Glenbrook North’s 1966 State Championship Team.

Sam Samorian has lived in Northbrook since 1958. He was a teacher, coach, and administrator at Glenbrook North School for thirty-four years.

Sam is a founding member and served as the secretary for the Mid-State Officials Association, which was the forerunner to the IWCOA. He was one of the first ten IHSA certified wrestling officials in the state of Illinois. He has served as an IHSA Rules Interpreter. Sam worked as an official at the IHSA State Championships twenty-one years. He is beginning his forty-fifth years as a certified wrestling official in Illinois. Sam has sponsored the IWCOA Official of the Year award and is an active member of the IWCOA. He is a life member of both the Illinois Wrestling Coaches and Officials Association and the Illinois High School Football Coaches Association and is the only Illinois State Alumnus who is both the IWCOA and the IHSCA Hall of Fame. Sam was named IWCOA Official of the Year in 1980 and National Federation Outstanding Official in 1989. In 1990, Sam was Grand Marshal for the I.H. S.A. Individual State Championships.

In 2003 the National Wrestling Hall of Fame and Museum honored Sam Samorian for Lifetime Achievement to Wrestling.