We all know the old saying “Wrestling prepares you for the rest of your life.”  Herb House’s on the mat and the off the mat accomplishments as a coach on the international level, service in the United States Army and as a business owner prove that he has learned from this sport.

Starting out by wrestling for IWCOA Hall of Fame member, Fred Arkin, Herb began wrestling for the Oak Park Little Huskies.  This path started Herb on a journey that would take him across the world, both in wrestling and beyond.

After claiming an IKWF State Championship and multiple time place-winner for the Little Huskies, Herb went on to be a two-time All-State Place Winner for Conant High school.

Herb is a SEVEN TIME US Open National place winner; highlighted by a championship 1993.

We are all part of a grateful Nation for Herb’s service in the United States Army.  During his service; Herb was a two-time Armed Forces Champion.

Being such a fine student of our sport; Herb gives back as a coach and impacting wrestling on a national level.  He has been on the following coaching staffs:

In 2017 Herb was selected as the USA Greco Roman Coach of the Year.

Currently Herb is the 1st Vice President of USA Wrestling and coordinates all Greco-Roman programs.

For the past 15 years; Herb has operated his own company; Global Screening Solutions. 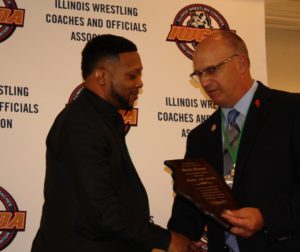