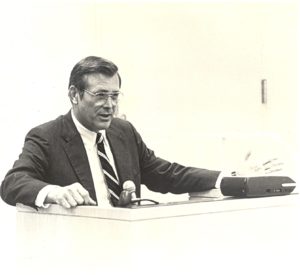 Began his wrestling career at New Trier High School for Hall of Famer Al Hurley. Mr. Rumsfeld placed 4th in the State in 1950 and was captain. His collegiate days were spent at Princeton where he placed 3 times in the Eastern; 4th, 2nd, and 4th. Captain 1953 and 1954, All Navy 1953 and Olympic Trails Champion 1956.

Upon graduation he enters the United States Naval Service where he was a fighter pilot.

Returning from the service he entered the political arena, where he became a United States Representative for Illinois at the age of 30. In Washington, he was became well known for his efficiency and expertise in various departments. Served 4 terms before resigning to serve President Nixon.

While in Washington he became the Senior Advisor for three Presidents.

1n 1969 he became Director of the Office of Economic Opportunity

1971- Director of the Cost of Living Council

1975- Became the Secretary of Defense (youngest in history)

-Became an advisor for Mr. Regan on Foreign policy and Defense Issues

1983- Special Envoy to the Middle East

Now in private business as a senior advisor to booking firm.