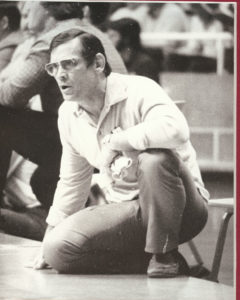 Jack Gardner began his career at Springfield Feitshans High School – now Springfield Southeast where they started wrestling in his Senior Year. He was a State Qualifier after only 1 years’ experience. His Collegiate Wrestling was at Eastern Illinois University, under Hop Pinther, Hall of Famer, where he was Conference Champion and 6th in the NAU.

His Coaching career began at Springfield Feitshams in 1964; during this stint he had 5 State Qualifiers. In 1969 the new building and the new name Springfield SE began. Jack opened this building and is still there. During this time Springfield SE has had 39 State Qualifiers and 1 Team Qualifier. They have had 4 All Staters, 1 was a champion and like all proud fathers, this champion was his son. In his 26 years as a head coach he has won over 350 dual meets; 9 regionals; 3 Sectionals; 11 Conferenc1 Championships and 15 City of Springfield Championships.

Jack has been involved in the Prairie State Games since their beginning. He has also assisted in area Free Style and Greco for the Illinois Wrestling Federation.