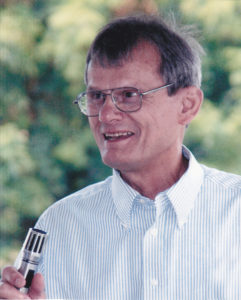 John Marchello, known better as Jack in his high school and college years, attended Thornton Township High School and graduated in 1954. Jack was a two-sport athlete lettering in football and wrestling. He played right guard in football earning all conference honors and honorable mention at the state level. As a wrestler Jack served as co-captain his senior year having had the good fortune to be coached by Hall of Fame Wrestling coaches, Ted Czich and Jack Robinson. In 1954, his senior year, he was a conference, district, regional, and state champion at 175 lbs.

In the fall of 1954, Jack enrolled at The University of Michigan having been recruited by National Hall of Fame wrestling coach, Cliff Keen.

In 1956 Jack placed 3rd in the Wilkes Open Tournament in Wilkes Barre, PA, and then went on to win the Big Ten Championship at 175 lbs.

In 1957 he won first place in the Wilkes Open at 175 lbs and placed 2nd in the Big Ten Conference Tournament losing to Hall of Famer Ken Kraft at 165 lbs.

In 1958 Jack had an undefeated season in dual meets and went on to win the Big Ten Championship at 175 lbs.

While attending The University of Michigan, Jack enrolled in the School of Architecture and Design. As he was specializing in his favorite interest, he moved to the design and development of safety equipment with a focus on helmetry. During this time he was assisting Coach Cliff Keen in the early development of the four strap Keen wrestling headgear, working mainly on tooling and material selection.

Before graduation in his senior year, Jack was hired by the BUCO Products Co. of Southfield, Michigan, a supplier of military products, to work on the development of tank and aircraft helmets. This employment resulted in a four year program during which he gained insight and knowledge into the design and fabrication of helmets; greatly benefiting his separate and continuing relationship with Coach Keen and the Cliff Keen Wrestling Products, Co.

The fateful meeting of Jack and Coach Cliff Keen created a relationship that has lasted to this day resulting in a joint effort to design and manufacture wrestling equipment, especially headgear.

By 1961, Jack formed a company to supply component parts to Cliff Keen Wrestling Products, and in 1965 took over the assembly of wrestling headgear. A separate company was formed with Harland Danner, a former University of Michigan wrestler and Big Ten champion. The company was named Danmar Products and it continues today designing and manufacturing a variety of protective headgear from small, cranial shaping orthosis for newborns with skull deformities to protective helmets for adults with physical and mental disabilities. Danmar Products also produces a line of durable medical products used for positioning individuals in wheelchairs as well as flotation devices for adapted water aerobics. (www.danmarproducts.com)

Today, the Keen/ Marchello relationship continues with Jim Keen, Sr. and his sons, Jim, JR. and Tom. Over these past 50 years millions of headgear have been produced and marketed. Designs have been modified and new models introduced such as Tornado and the Twister. Thousands of

young wrestlers have avoided the experience of cauliflower ears thanks to the Keen/Marchello relationship.

Jack is still actively working today to improve the durability and quality of wrestling equipment. His effort to design and manufacture wrestling headgear for over 50 continuous years is an individual record.