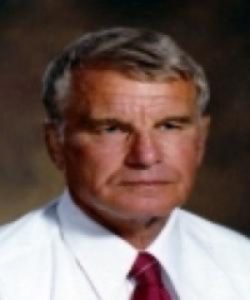 Mr. Robinson began his wrestling career at the various YMCA’s in his area, since high school Thornton did not have wrestling at that time.

His collegiate career began at Missouri where he wrestled, but service in the Army interrupted this career. After the war, Jack entered the University of Illinois where he played football and wrestled.

His teaching-coaching career began at Thronton township High School where he assisted Ted Czech who is a IWCOA Hall of Famer. Together they amassed a great tradition of winning and producing champions.

In 1960, Jack move to the new school in Thornridge to become Head Football and Head Wrestling Coach. His teams were conference champions once and twice won District titles. He had one state champion and 2 other place winners.

In 1968, Jack took over the Head Wrestling position at the University of Illinois, and also assisted in Football. His wrestlers did well in spite of very little financial assistance at that time. He had 6 Big 10 place winners

In 1973, Jack move to Utah State University where he served on the football staff.

In 1975, Jack moved to Thornridge High School in the capacity of Athletic Director, a position he still occupies.

At this writing, Mr. Robinson is completing 29 years of service to the Athletic community of the State of Illinois.