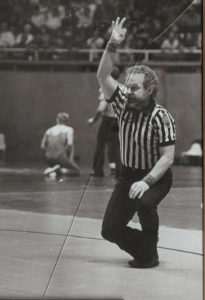 Jim began his ·wrestling career at Palatine High School, under the direction of Hall of Famer John Ellis. He -was a State Qualifier. His Collegiate days were at Knox where he was 2nd in the Midwest Conference. While a Senior in College he began his career as an Official – a career that spanned 20 years in Illinois, before his company moved him to California, where he now resides.

He officiated 20 Regionals; 15 Sectionals and had 12 State Finals. In 1979 he was honored as the Official of the Year.

He has also officiated at the Wheaton Invitational; The Division 3 Nationals and two times at the Illinois Kids State Tournament.