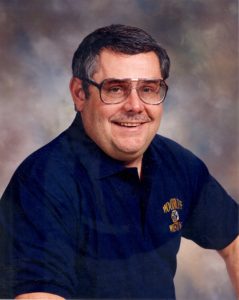 Jim is from Spring Valley, Illinois – Hall High School, where he played football and baseball.

His Collegiate days were at Western Illinois University, where he got involved with Wrestling.

He started Coaching at Peoria Woodruff High School, becoming the 2nd Wrestling Coach in the school’s history when he replaced the retiring Hall of Famer Charles Gross in 1968.

His achievements at Woodruff have been many and include 303 dual Wins; 22 Winning Seasons; Peoria City Championships 14 times;· 5 Conference

Championships; 4 Regional Championships; 19 State Qualifiers; 6 State Place winners with 1 being champion; and coaching his own Son Jayson to All State Status.

Besides winning a lot of tournaments, etc., Jim is quite proud of fact that 13 former Woodruff wrestlers are still active in coaching.

Jim started the first kid’s tournament in Central Illinois and since that time was involved in hosting numerous IKWF Regional and Sectionals. He was also the color commentator for IKWF State Finals in 1987-88. Jim has been a life time member of the IWCOA.