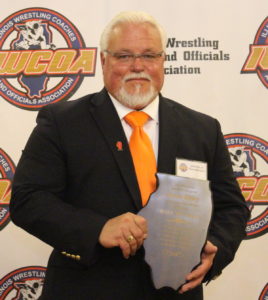 Jim Risley was born in Springfield Illinois in 1956. Jim started his wrestling career at St. Joe – Ogden High School in 1971. Upon graduation, he attended the U of I and earned a Bachelor’s degree in Applied Life Studies in 1980 and then a Masters in Educational Administration from Eastern Illinois University in 2011.

In 1980 he was fortunate enough to land a teaching/coaching position at Mahomet-Seymour School District. He was given a job as an assistant to IWCOA Hall of Fame Coach Bob (Moose) Handlin whose varsity wrestling team finished with a 20-1 record and placed 3rd in the State.

Hall of Fame wrestling Coach Rob Porter took over the head coaching duties in 1990 and Jim became his assistant from until 1992 where the wrestling teams had a 30-9-2 record and finished 3rd in state.

During Jim Risley’s time as an assistant, Mahomet-Seymour had 41 all state wrestlers including 19 State Champions. Jim was named the IWCOA Assistant Coach of the year in 1985 and 1987. Jim has worked with 6 IWCOA HOF Coaches while at Mahomet. Bob Handlin, Marty Williams, Tom Porter, Rob Porter, Jim Moxley and Rob Ledin.

As the Junior Varsity coach Jim’s team had an unblemished record of 131 wins and 0 losses. The fresh/soph teams won 27 tournaments and had 5 second place finishes.

Jim has been tournament manager for all regional and sectional wrestling tournaments held at Mahomet-Seymour from 1980 to 2014. He has had the same duty for the Marty Williams Invitational during the same time periods. Since 2002 Jim has been a certified IHSA skinfold tester, and he had the pleasure of housing wrestlers and helping run cultural exchange wrestling meets held at Mahomet-Seymour during the 1980’s.

Jim also had the privilege of coaching the Girls Track Teams at Mahomet-Seymour Junior High (1980-1983) and then at the High School High School (1984-1997) where his teams won a State Championship in 1997. They placed 3rd in 1986 and won 9 sectional titles. He coached 54 all-state athletes and had a 141-18 dual team record. He was a twice the ITCCA South Division Class A Girls Track Coach of the Year. Jim was an assistant Boy’s track Coach at Mahomet-Seymour from 1999-2013 where he coached 12 IHSA state qualifiers in the Pole Vault.

From 1980 to 1984 he coached the Mahomet-Seymour Girls Volleyball teams to two sectional titles, one regional title and 88 wins.

After retiring from 34 years of teaching Junior High History, Jim started a non-for-profit team building obstacle course in which numerous teams and over 1000 individuals, including many wrestlers, have participated. Jim has also recently started competing in lifting competitions and currently holds the NGWF’s Indiana State Bench press record for his age and weight.

In 2016 Jim had the honor of being elected into the SJO High School Hall of Fame. He thanks, his parents and 3 brothers for being his inspiration, his wife (Angie) for being his hero and sons, daughter in law and grandsons for being his motivation. Jim feels truly blessed to have worked with great coaches, athletes, parents, and administrators during his career at Mahomet-Seymour.