In 1984, Jason became interested in wrestling after his older brother, Arlen, watched Hulk Hogan portray Thunder Lips in the movie Rocky 3 and immediately tried out for the wrestling team in Junior High School. During Arlen’s 1st year on the team, he would come home, and practice moves on Jason. A year later, Jason began wrestling for the Schaumburg Shooters IKWF Club before transferring to the Junior Cougars IKWF Club where he wrestled for IWCOA Hall of Famer Fred Arkin. While wrestling for the Junior Cougars, Jason qualified for the IKWF State Tournament twice and placing 3rd in 1991.

After junior high, Jason competed at Hoffman Estates High School for IWCOA Hall of Famer Bill Scully. Jason was a varsity starter all 4 years in high school, becoming the first in school history to amass over 100 career victories. While in high school, he won the MSL Conference Tournament twice, and the IHSA Regionals twice.

Following high school, Jason went on to pursue a degree in Civil Engineering at Purdue University where he was a member of the University’s wrestling team for 3 years and coached by IWCOA Hall of Famer Tom Erikson. During Jason’s last year in college, he was an assistant wrestling coach at Clinton Prairie High School in Frankfort, Indiana. After graduating from Purdue University, Jason stayed involved with the sport of wrestling and became an official at the suggestion of his high school coach.

In the last 20 years Jason has officiated the following folkstyle events:

Officials Director of the IKWF’s North Chicago Sectional since 2004.

In an effort to improve his skills as a referee, and at the suggestion of Albert Williams, Jason took up officiating the international wrestling styles of freestyle and Greco-Roman in 2005. In 2009, Jason became ILUSAW’s Freestyle & Greco-Roman Mat Officials Director and in 2015 he was named USA Wrestling’s Young Official of the Year.

Since taking up Freestyle & Greco-Roman officiating, Jason has worked:

Of the 48 Regional and National events worked, Jason was assigned by USAW as the tournament’s Head Official or Clinician 7 times.

Throughout Jason’s 36-year involvement with the sport of wrestling, he would not have been able to accomplish anything without the love and support of his family, friends and mentors. 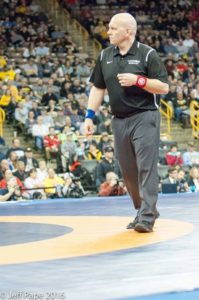