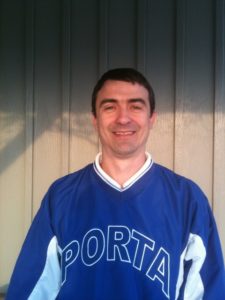 A graduate of Plano High School, Jeff Hill was a three year starter for the Reapers. He was coached by Mick Ruettiger for one year and Joe Cliffe for three years, both Hall of Fame Coaches. Jeff was a three time sectional qualifier and was a captain his senior year. He also played football and participated in track.

Jeff attended Wartburg College in Waverly, IA. He was a four year starter and won 60 matches. He earned his bachelor’s degree in 1990.

After college Jeff began his coaching career at Parkersburg, IA. His team Parkerville team was 13-7. He then came back to Illinois to take the reins of the PORTA program in Petersburg, IL. During his twenty years at PORTA his teams have had a record of 472-87-2. He has had 68 state qualifiers, 23 place winners and 3 State champions.

In 2007 Jeff was named IWCOA Class A Coach of the Year. He has been nominated coach of the year several times. Jeff is a member of the Board of Directors of the IWCOA and the IHSA Wrestling Advisory Committee. He is presently the principal of PORTA Junior High School.