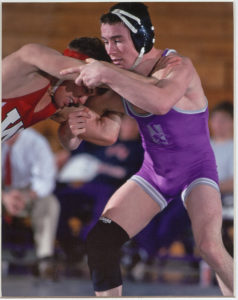 After graduating from Elgin High School in 1990, Jeff attended Northwestern University in Evanston on a wrestling scholarship and qualified four times for the NCAA tournament.

Jeff received a Bachelor of Science degree in psychology from NU in 1995. He was a member of the university’s Wildcat Wrestling Club. He was a three-time national champion in Greco-Roman, competing in the 114.5-pound weight class in the university division. Following graduation, he served one year as assistant wrestling coach at Bartlett High School before pursuing his dream of becoming a Navy Seal. When he completed boot camp at the Great Lakes Naval Training Center in North Chicago he won the base’s Military Excellence Award for leadership. He was accepted into training for the Navy Seals in 1998, but his career path changed when he was accepted into the Navy’s officer training program in Pensacola.

Jeff, who was born in Boston and raised in Bartlett, died Wednesday, April 26, 2000 in Pensacola, Florida after being struck by a pickup truck while riding his motorcycle. He was an ensign in the Navy.