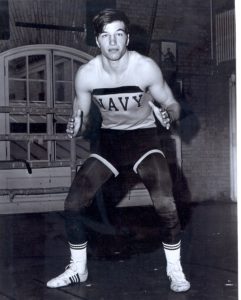 A 1971 graduate of Richwoods High School, Jeff Simons played football, wrestled, and ran track. Jeff placed 6th in the state tournament in 1970 at 175 pounds and was state champion in 1971 at 185 pounds, going 42-2 with 30 pins. He wrestled for Bob Easter, a Hall of Fame coach. He was team captain his senior year.

Jeff was recruited heavily for football and wrestling. Jeff chose to attend the U.S. Naval Academy in Annapolis, Maryland. He started at tight end on the freshman football team that went 7-1, losing only to Alabama. He then made the varsity wrestling team as a freshman, and defeated the Army wrestler who had finished second in the EIWA that year. He gave up football to concentrate on wrestling, competing at 190 and heavyweight all four years. He was a 3-time NCAA qualifier, and made All-American, finishing 5th in 1974. Jeff was a two-time EIWA runner-up and Champion once. He was team captain his senior year, wrestled in the East-West All-Star Match, and wrestled against the Russians in a dual meet in the Washington, DC area. He earned the Weems Wrestling Award his senior year, given to the wrestler who has demonstrated in the highest degree the qualities of aggressiveness, determination, sportsmanship and team spirit. Upon graduation he was commissioned a Second Lieutenant in the U.S. Marine Corps.

Jeff continued to wrestle while in the Marines, capturing 9 Gold Medals in the Interservice Championships, never losing a match in Freestyle or Greco Roman. He captured a silver medal at 220 pounds in the 1978 CISM Games (world military games) in Teheran Iran in Greco Roman, and the gold medal at the 1979 CISM Games in Baghdad, Iraq. Jeff was a national runner-up in freestyle and a national champion in Greco Roman, both at 220 pounds. He competed in multiple tournaments representing the US in Europe and Cuba, winning the Cerro Pelado Tournament in Cuba at 220 pounds in 1979. Jeff was a member of two Greco Roman World Teams for the US, placing fourth in the world at Gothenburg Sweden in 1977, the highest finish for a US wrestler that year. He competed in Mexico City at 198 pounds in 1978, and was alternate on the 1979 team that competed in San Diego. He also served as the athlete’s representative to the Olympic Committee. In 2000, Jeff was one of the 10 wrestlers in the Greco Roman 220 pound weight class nominated for wrestler of the century prior to the Olympic Games in Athens.

Jeff coached the All-Marine Wrestling Team in 1978 and 1979, leading the Marines to their first ever Interservice Championships both years, beginning a string of 10 in a row. He also co-coached the US team that competed in the CISM games in Teheran, where they team finished second. Jeff was the player-coach and team leader for a US team that competed in Germany and Hungary in 1982. He coached several national champions and World Team members, and 2 wrestlers who became Olympians. He was awarded the Navy Commendation Medal for his accomplishments as a wrestler and coach during his service in the Marine Corps.

Jeff left the Marine Corps as a Captain in 1980, and began a career at Procter & Gamble. As he has moved to various cities with his work he has continued to give clinics in Freestyle and Greco Roman to the local youth and high school athletes, and has volunteer assistant coached at high schools in Albany, Georgia and Mason, Ohio.

Jeff began officiating High School wrestling while he worked in Georgia, and worked 2 state tournaments. After a tour in Mexico City he and his family returned to the US in the Cincinnati area, where he has continued his officiating, gaining recognition from his association and refereeing the State Tournament in Ohio. He is just completing his 21st year of officiating.

Jeff and his wife Jan reside in Cincinnati, Ohio. They started dating while they were at Richwoods and were married after Jeff’s graduation from the Naval Academy. They will be celebrating their 35th anniversary this year. Their daughter, Christie (Rob Fischer), and son, BJ (Alex Carrabin), live in the area and each have a son (Jackson Fischer and Tyler Simons).