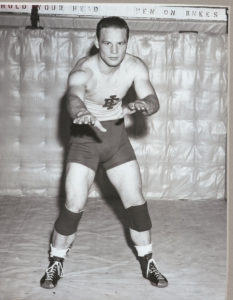 Jim began his wrestling career in Springfield. His Collegiate career was at Eastern Illinois University. At Eastern he was a 3 time place winner in the IIAC. He lettered 4 times and was Captain his Junior and Senior Years. His overall record was 50-18 with 25 falls. He culminated his wrestling careers with a 3rd place finish in the NAIA Nationals and as a senior winning the NAIA National Championship.

His coaching career began after graduation at Eastern Illinois University as the graduate assistant. His high school career began at West Leyden High School under Marty Swartz (an IWCOA Hall of Famer) as the Freshman Coach. He has been at Springfield Lamphier for the past 21 years. His overall win-loss record is 233-127-11. He has had 6 Regional Champion ship teams; 5 Conference Championship teams and 1 Sectional Championship Team. He has had a number of State qualifiers, with 4 people placing.

During his time at Eastern, Jim also lettered in Football. Eastern Illinois honored him in 1985 by electing him to that school’s Hall of Fame. Grand Marshall 1993