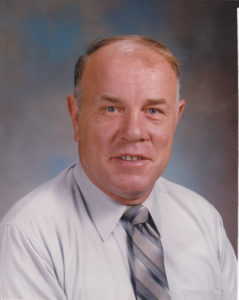 Jim Mahar was born and raised in Mendota, IL. He graduated from Mendota High School in 1961. He did not wrestle in high school. He played football and basketball for four years and participated in track for three years. He was first team All-Conference in football and was a member of the 4X4 relay team that qualified for state.

Jim went on to Grace Harbor Junior College in Aberdeen, WA and then on to Western State College in Gunnison, CO. He earned his bachelor degree in 1965. Jim was named second team All-Conference his junior year and 1st Team All-Conference his senior year. He was also named captain his senior year. Jim also participated in track in college. He played on two undefeated football teams and his senior year his football team played for the small college National Championship, suffering their only loss.

From 1966 through 2000 Jim taught at Amboy School District #272. He taught speech, English, Physical Education and Health. In 1968 he started the wrestling program at Amboy. Having no wrestling experience, Jim did research and studied the sport. He learned through attendance at clinics and camps in Colorado, Michigan and Iowa to learn more about wrestling techniques. In 1971 he started a kids wrestling K-8 wrestling program and hosted the first Northern Illinois Kids tournament. In 32 years, Jim qualified 15 wrestlers for the state tournament. He coach five place-winners, including one State Champion. His teams compiled a 324-249 dual meet record.

Jim coached football from 1969 to 2000 and also coached golf one year. He was selected to serve as Grand Marshal at the Byron Section and in 1987 he received the National High School Coaching Award.

In 1964 Jim married his high school sweetheart, Sandy. He is a member of the Elks Club. His hobbies include fishing and being with his grandchildren.