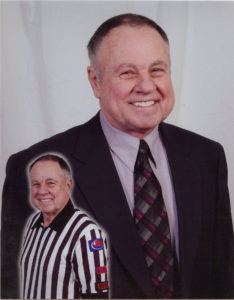 Jim Richards was born and raised in Hoopeston, Illinois. He attended school in Hoopeston and graduated from Hoopeston High School, which did not have a wrestling program. The sports that he participated in during high school were football, baseball, golf and tennis.

Upon receiving his degree, Jim was hired to teach at Henning High School in central Illinois. The assignment was to teach five classes and coach their athletic teams. This included baseball, basketball, and track. Henning consolidated with Bismarck and he was able to follow the consolidation. His new assignment at Bismarck-Henning was to be an assistant coach in football, basketball and head baseball coach.

During his third year of teaching, the wrestling coach took a job at the junior college and left Bismarck-Henning without a wrestling coach. Having just retired from basketball, he was free in the winter and took the reins of the wrestling program. The team had a win­ less record of 25-2 over his first two years.

Hoopeston had started their wrestling program in 1967 and their coach left after one year. The Hoopeston superintendent recruited Jim superintendent to take over Hoopeston’ s wrestling program. He was assigned to teach Driver Education and history and coach wrestling. While at Hoopeston, he had twenty-nine state qualifiers and eight place­ winners, including one State Champion and three runners-up. The Hoopeston IKWF team was also formed under the direction of Jim in 1970. This was the start of the statewide IKWF organization and Hoopeston still exists as one of its original teams. The first Hoopeston team won the first IKWF central sectional. The teams he has coached have a combined record of 262-93-4. His teams won seven district/regionals and one sectional championship. The 1979 Hoopeston team, under his direction, finished in 5th place at the state meet.

Jim has been a registered official since 1966 when he started coaching at Bismarck­ Henning. He started officiating full time upon his retirement from coaching. He has worked twenty-four regionals, four sectionals and the Dual team state championships.

In 1994, Jim became officials Chairman for the IKWF, a position he still holds. He started a system of rotating officials into the IKWF state series five years ago. It has allowed several officials to work the individual State and Dual Team state meets. The other improvements he has helped implement in the IKWF have been tracking and registering officials, suspension of coaches and wrestlers for flagrant misconduct, and tournament assignment for officials.

Jim has offered a helping hand to officials, coaches and wrestlers when asked and he helped to promote the sport of wrestling.

Jim has four children, three of whom have been actively involved in wrestling. He credits his wife for understanding the time and demand that wrestling places upon a marriage.