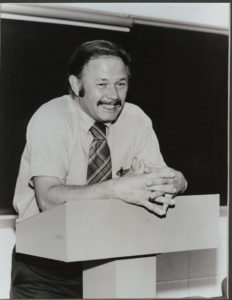 While at Oak Park he had 1 State Place winner. While at Glenbard South he had 4 State Place winners, one of which was a Champion – the first Champion of the DuPage Valley Conference. In his short Varsity Wrestling Coaching Career, he accumulated over 100 wins.

He was one of the first to pioneer International Wrestling in our area, being a many time host to Free Style competitions. He was the Coach of the Illinoi team that hosted the New York Team. He was very active in the Mayor Daley Club and the Old Navy Pier activities.

Although not coaching at the High School level, he was extremely active in the Illinois Wrestling Federation up to the time of his untimely death in 1980 at the age of 43.