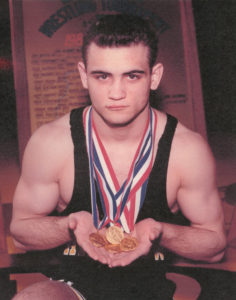 Joey is from Tinley Park Andrews where he became the First Double A State Champion. He won his Titles in 1986 – 1987 – 1988 and 1989. He had a 161 Win 1 Loss Record. While in High School he was named the Outstanding Wrestler in 1988 and again in 1989 by the IWCOA. He also competed in the State Illinois Wrestling Federation Tournament, placing 2nd and 4th and becoming a member of the Junior National Team.

His Collegiate Days were first at the University of Michigan where he placed 5th, 2nd and 2nd in the Big 10 and 6th and 3rd in the NCAA’s. He then transferred to Boise State where he qualified for the Nationals.

He placed 4th at the Sports Fest; 8th in the USA Open in Free Style and 3rd twice at the Midlands.