John Dziewiatkowski started his wrestling career in 3rd grade with the Mat Rat Wrestling Club and later Jay Stream Middle School.  He moved on to wrestle at Glenbard North HS and was coached by IWCOA Hall of Fame members Bob Fulk and Mark Hahn.  John had a successful career at GBN winning over 100 matches, including being crowned DuPage Valley Conference and IHSA Regional Champion in 1987, while being a part of several state ranked teams.

John attended Northern Illinois University, and upon graduation, immediately returned to the sport of wrestling. In 1991, he became the President and Head Coach of the Waubonsie Braves Wrestling Club, where he enjoyed coaching his cousins Chris and Craig Dziewiatkowski, who would later wrestle at Montini Catholic High School.  Before moving on to coach at Montini, John founded the Fox Valley Wrestling Club and served as President and Coach alongside Jose Martinez.  Fox Valley spawned numerous IKWF and IHSA individual state champions, and won several IKWF Team State Championships. The Fox Valley Club was one of the first “super clubs” formed in Illinois youth wrestling, and helped shape the growth and skill level of our sport.  In addition to coaching, John served as Assistant Sectional Director and Newspaper Editor for the IKWF.

After coaching in the IKWF for 10 years, John was asked to join IWCOA Hall of Fame member Mike Bukovsky’s Montini staff and later IWCOA Hall of Fame member Israel Martinez’s staff, serving as the lead assistant coach at Montini for 23 years.  It is no coincidence that Montini was transformed into a state and national power during John’s years as an assistant coach, as he was an innovative and impactful coach. The school won 16 IHSA State Championships, produced 67 Individual State Champions, and 174 Individual State Place winners, while John was on the Bronco’s staff.  Montini also landed several national accolades during John’s time, perennially being ranked in the top 20 teams in the nation, and even being voted as the 13th best high school wrestling program in the nation over the decade spanning the early 2000’s.  Montini’s schedule and national reputation were certainly heavily influenced by John’s vision.  Although never one to seek attention or accolades, John was nominated for the IWCOA Assistant Coach of the Year Award numerous times, and won the award in 2004.  Also, in 2004 John was recognized by the National Wrestling Coaches Association as the Region 4 Assistant Coach of the Year.  Currently, John is a coach at Neuqua Valley High School where he assists one of his former Montini wrestlers, Mike Mucha.

John is a motivating and dynamic coach whose vision and passion heavily guided all of the teams that he has been a part of throughout his career.  His humble, lifelong dedication to the sport of wrestling has influenced countless lives over the past 30 years. 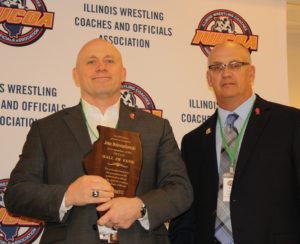