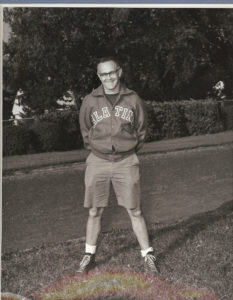 Mr. Ellis began his career as a wrestler at Geneva High School and later at Northwestern University.

He is now finishing his 29th year of teaching and coaching, a career that began at Palatine High School. John started the wrestling program at Palatine. During his coaching stint there, his dual meet wins have far surpassed the 150 win mark. He has developed 13 place winners of which four were state champions. His teams won a number of district titles, placed as a runner up in 3 Sectionals and won 1 Sectional. In 1963, his team placed 3rd in the State.

John is responsible for beginning the prestigious Palatine Tournament which has run with great distinction for 24 years.

Mr. Ellis is one of the early pioneers of our coaching association which was known as the Northwest Coaches Association and was president of that organization in 1969. The following year it evolved into the present IWCOA.

When Mr. Ellis moved from Palatine, he went to Forest View for two years as an assistant, but when Rolling Meadows was opened he heeded the call to start another new program, a program that is now moving along with success.