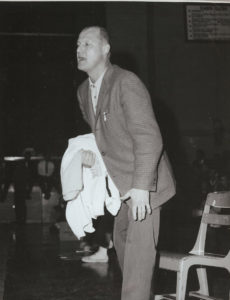 Wrestling Coach at Reavis High School from 1953 to 1969. During this time he has won over 300 dual meets and lost less than 40. A number of South Suburban Conference Championships, District and Sectionals Titles plus many Invitational Tournament Titles are included in his accomplishments. Above all however, are the Three State Championships won by his teams in 1961, 1962 and 1965. He has coached a total of 27 place winners, among them are 11 State Champions.

John Fitzgerald has devoted much of his life to the youth of Illinois and to Wrestling in Illinois. He was the first man to promote wrestling with Illinois Bell Telephone film. The title of the film was “Ready Wrestle”.