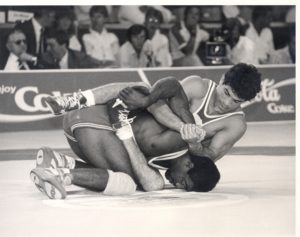 John began his Wrestling Career at Oak Park High School, where as a senior he was undefeated in winning the State Championship. He also placed 2nd in the Junior National Greco Roman Championships.

His Collegiate days found him at Wisconsin University, where he became a 4 Time Big 10 Place winner and a 3 time All-American. He also placed second in the Midlands and was the Midlands Champion.

John has continued to be a major man in the Wrestling area, although he did sandwich 3 years in Coaching at New York University where he developed o All Americans in NCAA Division 3.

John is still competing and so far has: