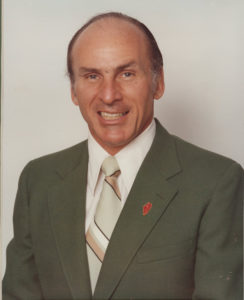 Jack began his athletic career at Lane Tech in Chicago, continued this through his service in the Marine Corp, Wright Junior College and finally Northwestern University.

As an official he had his beginning 24 years ago. He has held the rank of certified official for 13 years. During this time, he has officiated numerous dual meets and conference tournaments; officiated at Districts since 1965, officiated at the Sectionals since 1966; has worked the Big 10; the Midlands and the Division III Nationals. His proudest moments have been when he has officiated in the Illinois State Finals, this event now numbering 6 times now.

Jack as many of you will remember was the first full time announcer for the Illinois High School State Wrestling Meet. He did this for 5 years. He has also announced at the Big 10 Championships; The NCAA Division I; The USA – Russia Dual Meet. He has also worked the Midland s and the State Meet as a timer and a scorer.

Jack has been an officer and served on the training committee of the Mid­States wrestling and Offficials Association which was a forerunner to the IWCOA. He is a lifetime member of the IWCOA.