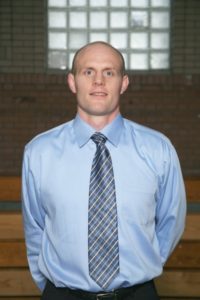 John is currently the assistant wrestling coach at Northwestern University and is training for the 2000 Olympics.