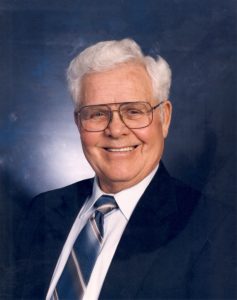 John coached at Harvard High School for nearly 30 years. It is interesting to note that his beginnings were with the Basketball Program, whereas the Varsity Coach he had 104 wins and 61 losses. After leaving the Basketball Program, Harvard needed a Wrestling Coach. John entered our profession and immediately establish had Harvard as a tough competitor. John actually started the Wrestling program at Harvard in the Physical Education Classes. He Coached Wrestling at Harvard for 15 years, retiring in 1978. During that time his teams won 191 meets; lost 76 and tied 5. He had 18 qualifiers to the State Finals, with 10 Place winners. While competing in One Class, his teams won One Regional. When Competing in Class A, his teams won 5 Regionals; One Sectional and Placed 2nd twice in the sectionals. His 1974 Team Placed 4th in the State. During this Time Harvard operated as an independent school. John was honored as the Class A Coach of the Year in 1978 by the IWCOA. John coached basketball at Lee Center and Wauconda before coming to Harvard It is noteworthy to add that his 1959-60 teams was undefeated in regular season play.