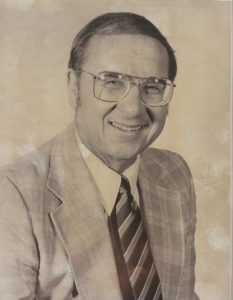 John is being recognized as an official. He began his career at Blue Island High School, wrestling for Mr. Blunk. His college career was completed at Illinois State, where he was a place winner in numerous conference tournaments and the famous Wheaton tournament. His coaching career began, while still in college, at Normal U-High with the lower levels. After graduation, he went to Niles Township as the lower-level coach. He moved to Oak Lawn in 1959 as the Varsity coach. During this time he won the Southwest Suburban Championship and his team placed 5th in the State. From Oak Lawn he moved to Joliet Junior College where in 1963 his team was 5th in the Nation and his team was National Champions. During his time John was instrumental in getting the Junior College wrestlers recognized as an equal representative to the Olympic finals. John was the coach of this contingent in 1964. His next move was to the Administrative levels, where he is still employed most recently to Lake County Junior College. It was during this change that pursued his new career in wrestling, that of an official. Since 1966 he has officiated 5 State Finals, 9 Big 10 Championships and he was rated number 1, six times, 1 NCAA Division 3 Championships, 1 NCAA Division 2 Championships, and name Official of the Year by the IWCOA in 1978 and in 1980 Illinois State University named him to their Hall of Fame.