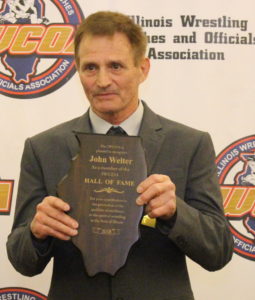 John Welter is a 1967 Grant High School graduate. He finished 2nd in the state at 133 lbs. his senior year. He was All-Conference all 4 years of high school and was inducted into the Grant High School Hall of Fame in 2014.

After getting his associate degree from CLC John took the next 4 years off before attending Wisconsin-Parkside in 1977 and 1978 and wrestling for their team. He graduated from Northern Illinois University in 1979.

Upon college graduation, John took a teaching job in the Grayslake Elementary District in the fall of 1979. He taught for 32 years, retiring in 2011. He is still a substitute teacher in the district.

John has specialized in starting new wrestling programs. He started the Fox Lake Wrestling Club in 1978 along with Mike Patrick. He has worked with the Fox Lake club for many years. John was instrumental it starting the Fox Lake Stanton Junior High program in 1979. Stanton won the IESA State Title in 1981 and 1995 under his direction. John started the Grayslake Middle School program in 1989. After stepping away from the Grayslake Middle School program, he came back in 2014 to resurrect a program that had been discontinued. He quickly led the GMS program to success, taking 4th in the IESA in 2016 and 3rd in 2017. John has coached 37 IESA finalists, 22 of them winning IESA State titles. John was named IESA Grand Marshal in 2009.

John would normally coach high school until January when the IESA season would begin. He coached 25 years at Grant HS, 8 years at Lakes HS, and at Grayslake HS for 5 years. He is currently an assistant coach at Grant while still coaching at Grayslake Middle School, something he has done throughout his career.

John has been an IHSA registered official since 1971. He was officiating Junior College and Division II Qualifying and National Tournaments in the early 1980s but gave it up because of his love for middle school coaching. He has officiated IKWF and high school regular season meets throughout his adult years.