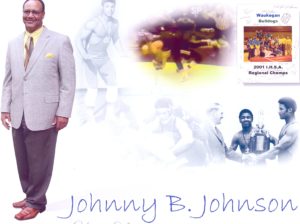 A product of Bob Therry’s North Chicago High School wrestling program, Johnny Johnson completed his four years of competition with a perfect 33-0 senior season and a State Championship in 1969. Along the way Johnny picked up tournament titles in the Ott Bay Memorial meet, the North Suburban Conference meet, the IHSA District (now Regional) meet and the IHSA Sectional meet. To cap off this perfect senior season, Johnny was named as a High School All-American.

Hall of Famer Don Flavin recruited Johnny Johnson to Northern Illinois University where Johnny proceeded to add to his wrestling accomplishments. Two times, 1972 and 1976, Johnny participated in the Olympic Trials. While at Northern, Johnny Johnson won 54 of his 69 matches. In 1973 Johnny won the U. S. Coast Championships and later qualified for the NCAA Championships at the University of Washington by winning the NCAA Eastern Regional tournament.

To be sure, Johnny Johnson was a superb athlete and a gifted wrestler. His style was explosive and dramatic. But no one could foresee the display of talent and determination that Johnny would demonstrate in Seattle that weekend of the 1973 NCAAs. Johnson entered the tourney unseeded and drew the sixth seed from Oklahoma State whom Johnny proceeded to pin. He dispatched his next unseeded opponent in a similar fashion. Down to the round of eight, Johnny was confronted by Fletcher Carr, the third seed out of Tampa. Johnny thrashed Carr by a score of 12-3 and a buzz began to arise from the crowd. Who is the guy? Next up was the two seed, Al Nacin from Iowa State. Johnny pinned him in 58 seconds. Johnny was in the finals against the one seed, legendary Greg Stroebel of Oregon State. In the first minute of action Johnny hit Stroebel with a salto right to his back – the packed gym went wild. Stroebel squirmed for what seemed an eternity and ultimately came off his back. Some still say that had the match been in the Midwest, Johnny Johnson would have been a National Champion. As it was, Stroebel fought his way back in the match an ultimately won, 11-7. Still today many regard this match as one of the best ever. Northern Illinois University named Johnny Johnson the Athlete-of-the-Year for 1973. In 1983 Johnny Johnson was inducted into the Northern Illinois Hall of Fame.