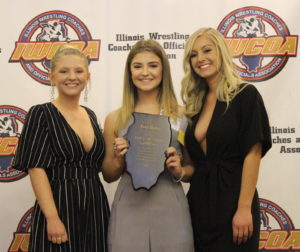 Joseph “Joei” Bales was born on July 6, 1967. Wrestling had always been a huge part of his life from a young age. While wrestling at Dirksen Junior High in Joliet, Joei won the IESA State championship at 85 pounds while in 7th grade and then the 95-pound title in 8th grade.

His dedication and determination continued into both High School and College. While in High School at Joliet Central, Joei was a 4x State Qualifier, 3x Regional Champion, and 3x Sectional Champion and he placed second in the state as a junior. During his senior year in 1985 at 126 lbs., Joei became an undefeated IHSA State Champion. He was also the captain of the Joliet Central undefeated class AA State Championship Team Coached by IWCOA Hall of Famer Mr. E. Mac McLaughlin.

After his dominating success in High School Joei was offered a scholarship to attend Northwestern University in Evanston, Illinois to continue his wrestling career. While at Northwestern Joei would earn All-American status. He was a four-year letter winner, 2x National Qualifier. Joei would place 3rd in 1986 and again in 1988 in the prestigious Ken Kraft Midlands Championships. In 1988 wrestling at 134lbs. Joei placed 5th at the 58th NCAA Division 1 tournament held at Iowa State. When he graduated, Joei’s 115 wins ranked number 2 on the all-time Career Wins list at Northwestern, and his 35-win Single Season victories at that time ranked number 4 all-time at NU.

Joei qualified to wrestle on the USA National team at the Espoir level. In 1987 representing the USA, he placed 4th at the Espoir World Championships in British Colombia, Canada.

After completing his decorated wrestling competitive career, Joei became a Lieutenant with the City of Joliet, Illinois and also had his own plumbing business. Joei enjoyed playing and watching all sports, however his favorite next to wrestling was golf. Legend has it, Joei from time to time, would throw a golf club into the pond.

Sadly, Joei Bales left his wrestling legacy behind on October 2, 2008 after a courageous fight against pancreatic cancer. He also left three beautiful daughters, Alicia, Emma, and Nikkola Bales who still reside in the Joliet area.