Ken Gerdes, III wrestled at Providence Catholic High School in New Lenox for Hall of Fame Coaches Tim Ruettiger and Mike Polz.  In High School he wrestled in 28 tournaments; placed 1st in 25; and was Runner-up in two. He was Runner-up at the IHSA State Championships as a freshman and won back-to-back State Titles in 1989 and 1990.  He and his father are the only father-son combination to both win two state titles. Ken finished his career as number nine on IHSA All-Time Win List from 1987-90 with a record of 179-8-0.

Ken was known for his “Pitbull” attitude. Along with his two individual state titles, Ken got to be part of a wrestling team that was just beginning a tenure of unprecedented dominance.  Ken was proud to be a leader on some of the best teams in Illinois history at Providence.

As a person, Ken’s character was evident every time he stepped on the mat.  He was a ferocious competitor, but he was also unwavering in his support of his team. Ken was the ultimate wrestler as an individual and a teammate.  As an example, in his senior year, this was most evident when Providence, ranked 2nd at the time was facing number 1 ranked team in the state.  Ken was unbeaten and may have cruised to an undefeated state title, his 2nd, but he offered to his team to move up a weight class and wrestle the number one ranked wrestler at that weight because he knew it would be better for the team.  Ken chose the tougher path.  He did it for his teammates, his friends.

Another instance, during his freshman year at The University of Illinois, Ken wrestling at the Big Ten Championships and was one win away from qualifying for the NCAA Division I National Tournament.  Midway through the tightly contested bout, Ken was injured him with an illegal move.  He could not finish the match and as per the rules his opponent would be disqualified.  Ken made the decision of a champion.  All he had to do was say he couldn’t finish and he was going to Nationals.  Instead, Ken opted to have the referee start the match then stop it quickly.  He chose to injury default, to let his opponent continue on.   Ken was quoted as saying “I didn’t want to win that way”.

Ken was featured in the Chicago Tribune as Prep Athlete of the week and the logo used for the Foundation in his memory was taken from a photo after winning his 2nd championship.

Inducted into Providence Hall of Fame in 2015, Ken follows his mother and brother in the IWCOA Hall of Fame. 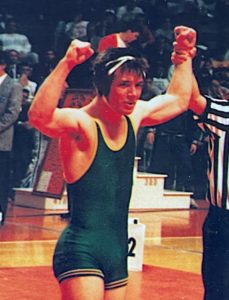