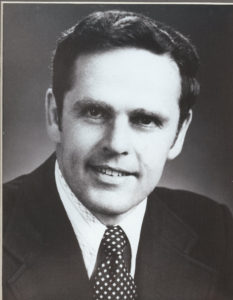 Ken is from Sterling, Illinois High School and Northwestern University.

After graduation from Northwestern University, Ken took over the head coaching job, where he became the youngest college coach at that time. He immediately established another distinction that has not been equaled. He coached his brother Art to a National Championship.

Ken has made some of his greatest contributions to wrestling as a contributor. He has been on the National Rules Committees of various types for a number of years. He has been a well-known commentator on Wide World of Sports, which has covered the Nationals for a number of years and for both the 1972 and 1976 Olympics. Closer to Home, Ken has sponsored the Northwestern Clinic, Co-sponsored the Midlands since its inception and now hosts that event. He has also hosted the State High School Tournament series and numerous Federation Events. For his work at the National Level, Ken was inducted into the Helms Foundation Hall of Fame.

Recently Ken has been elected President of the US National Wrestling Federation, during this time the National Federation Hall of Fame was opened.